Skip to content
It's not just the cars - it's the people! 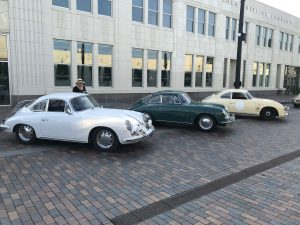 Luftgekült (air-cooled in German) is the brainchild of Patrick Long and Jeff Zwart. It is a photographer’s paradise, consisting only of air-cooled Porsche models. Luft 7 was held on Friday, September 10, in the Indianapolis “bottle works” district. This is the site of the abandoned art deco Coca Cola bottling plant, which is now a very cool hotel.

Like all the earlier Luft shows, you buy your entry online. The general admission tickets sold out in minutes. I was too late – “SOLD OUT”. But there was another possibility; a “Featured Car.” So I clicked on it and entered “Fritz,” the Smyrna Green 1962 356B. My reasoning was that Smyrna is an unusual color and Jeff Zwart is all about colors and background. It worked! 3 days later I got an email saying, “You’re in!”

I didn’t know if that meant we were in a parking lot or in the big show. As it turned out Fritz and 2 other 356s were in the big show with the bottling plant as our background! The white 356 owner drove it from Florida!!!! The show was as advertised. There was a 917 long tail, 908 Long tail, Carrera 550s and an amazing color palette of beautiful of air-cooled Porsches.

Jeff Zwart said he has never spent so much time setting up photos that he wasn’t going to take. Luftgekült is an amazing day for color and photo creation, and I would highly recommend it. Each car and groups of cars are set up so even a phone can take amazing photos as you can see in the online album (link below).

If you have never been to a Luft before, log on to their website (https://luftgekuhlt.com/), sign up, and wait for the email announcement. Don’t be slow or you’ll miss your opportunity! Jeff promised that the next one will be several times the size of Luft 7. 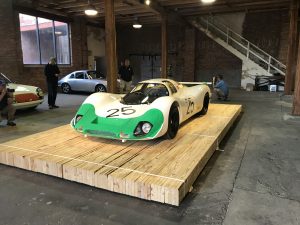 We had a super fun summer with some well attended events! Check out our event highlights from Grattan, open house, and September dinner drive. What happened in September for #PCAWMR- wmi.pca.org/wp-content/uploads/2021/10/2021-10-Uber.pdf ... See MoreSee Less

Well gang, The 2021 Grattan photos are uploaded to my site. Enjoy and share the link... ... See MoreSee Less

Of COURSE we are having fun at Grattan Raceway Park this weekend! ... See MoreSee Less

Please direct your questions or comments, suggestions, criticisms, or anything else to the webmaster using our "Contact Us" form.